Morello is a research program led by Arm in association with partners and funded by the UKRI as part of the UK government Digital Security by Design (DSbD) programme . It defines a new prototype security architecture based on CHERI (Capability Hardware Enhanced RISC Instructions).

A System on Chip (SoC) implementation of the architecture will provide a DSbD technology platform prototype, enabling industry and academic partners to test real-world use cases and inform future development.

Please refer to the top level Documentation repository to get started.

The Morello Platform Model is an open access FVP (Fixed Virtual Platform) implementation aligned with the development board. It is available to download from Arm’s Ecosystem FVP Developer page.

FVPs use Arm binary translation technology to create a register level functional model of system hardware (including processor, memory and peripherals) that can be run as an executable in a development environment. They implement a programmer’s view model suitable for software development, enabling execution of full software stacks on a widely available platform.

A walkthrough video of setting up the development environment is available - /resources/morello-platform-model-and-android-stack-walkthrough/.

The Morello hardware development platform becomes available from Q1 2022 onwards and will be supported by the same software stack. Availability of hardware will be limited - platforms will be restricted to partners involved in defined research activities.

Software releases supporting initial board availability may not include complete support. For example: Support for DDR & PCIe may not initially be performant. Satellite peripherals (such as audio and video IPs) and features such as power management may not be supported at inception. Support will evolve over time and specifics will be detailed via release-notes.rst in the Documentation repository.

Note that fimrware pre-installed on boards should be updated to the latest versions immediately after first validation of boot.

The diagram shows a high-level view of the software stacks targeting the Morello hardware and FVP platforms. 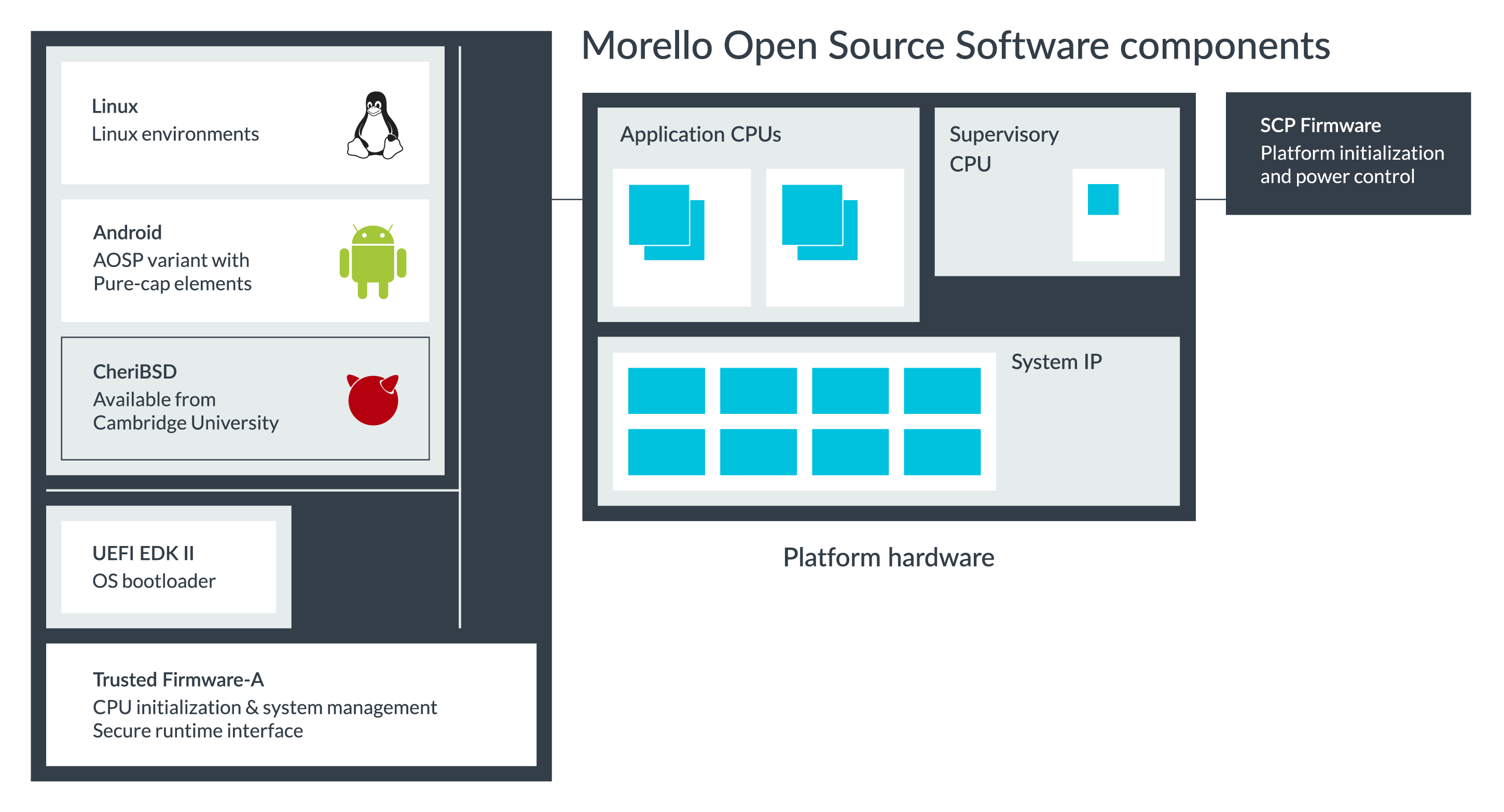 These stacks and the supporting tooling are intended to provide a foundation for ecosystem research, enabling collaboration on existing work packages and new work on alternate RTOS/OS environments, tools and workloads. Functionality will evolve in stages throughout the lifetime of the Morello Program.

Bare-metal development is supported by exit from the firmware stack at two points:

Please refer to standalone-baremetal-readme.rst in the Documentation repository.

An evolving Android environment has been available for Morello since the first release in October 2020.

This includes a minimal (nano) headless system Android (64-bit) profile suitable for use with the FVP. Full Android boot will be supported on the Morello hardware platform

For more information on the status of the Android environment, please refer to android-readme.rst in the Documentation repository.

Further information on the timeline for ongoing work in the Morello Kernel and the use of libshim in C libraries is available below.

Support for a Morello Linux environment is still under development.

Further information on the timeline for ongoing work in the Morello Kernel and the use of libshim in C libraries is available below.

A mature CheriBSD environment for Morello is implemented and hosted separately by the University of Cambridge Computer Laboratory. This provides a memory-safe kernel and userspace, as well as example ports of application frameworks, demonstrating more complete integration of CHERI (and Morello) support into an OS design.

Arm’s work on the Linux Kernel is focused on developing a new kernel-user ABI to support pure capability userspace software development. The aim is to replace all pointers at the kernel-user interface with capabilities, instead of 64-bit integers. This work is linked to development of associated C libraries (Bionic, Musl, GlibC) and developed against a PCuABI (pure capability kernel-user ABI) specification. Enabling Android and Linux environments capable of supporting a mix of pure capability and “COMPAT” standard 64-bit userspace components. (32-bit applications will not be supported)

Throughout 2022 PCuABI support will be introduced in stages:

Improve memory safety at the kernel-user boundary, leveraging the properties of capabilities

Morello is supported by LLVM-based open-source toolchains based on the CHERI Clang/LLVM toolchain from the University of Cambridge. Please note, these are experimental toolchains and as such features may be missing.

These include a C/C++ compiler (clang), linker (lld), debugger (lldb), various utilities (such as assembler & disassembler) and run-time libraries.

The use of these toolchains is dependent upon C library support.

Development of a GCC-based open-source toolchain and associated GlibC is ongoing.

An initial proof of concept release is expected early in 2022, with expanded functionality (dynamic linking, C++, etc) emerging throughout the year.

The display processor relies on an existing upstream Kernel driver. GPU support will be based on the Panfrost open source driver framework for Mali Bifrost GPU architectures.

Initial UI support in development environments will be based on software rendering.

Enabling Panfrost driver support for the Morello hardware platform and purecap ports of graphics libraries will be an ongoing activity through 2022.